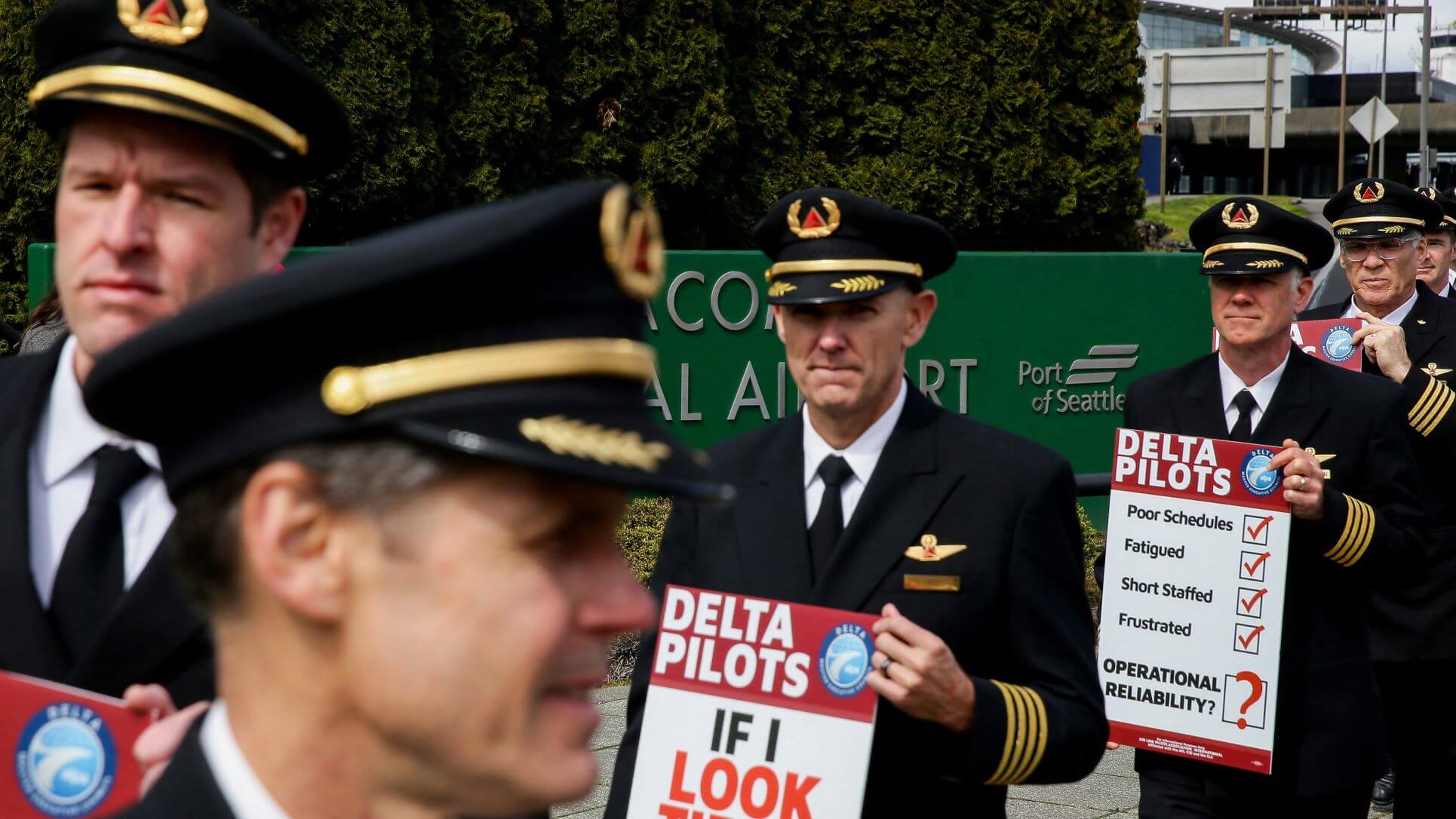 It should surprise no one that the first big pandemic-era display of worker power was in air travel, according to Sharan Burrow, head of the International Trade Union Confederation.

"The aviation sector globally is a prime example of bad employment policy," Burrow said of an industry whose high-volume, low-cost model has long been criticised for poor working conditions and eroding labour rights.

"People are voting with their feet," she told Reuters of the reluctance of many aviation workers to return after dismissals or furloughs, a trend which - alongside strikes over pay - caused havoc at European airports last month.

The bigger question now is whether other workers will follow suit and reverse a decades-old decline in industrial action that has seen employers gain the upper hand in labour relations.

Workers in transport, retail and healthcare - while lauded by governments for their bravery - did low-paid jobs in often unsafe conditions as millions of white-collar workers worked from home.

Compounding the impact of a decade of weak wage growth in rich countries after the 2008/09 recession, inflation now edging into double-digits is worsening the plight of the working poor.

Yet while such grievances are real, trade unions have lost much of the clout they had before the 1980s push for economic liberalisation.

Trade union density - the number of union members as a proportion of employees - has more than halved across developed economies from 33.9% in 1970 to just 15.8% in 2019, figures from the Organisation for Economic Cooperation and Development show.

U.S. Bureau of Labor statistics show a corresponding decline over the same period both in the number of serious U.S. work stoppages and total number of days lost to industrial action. 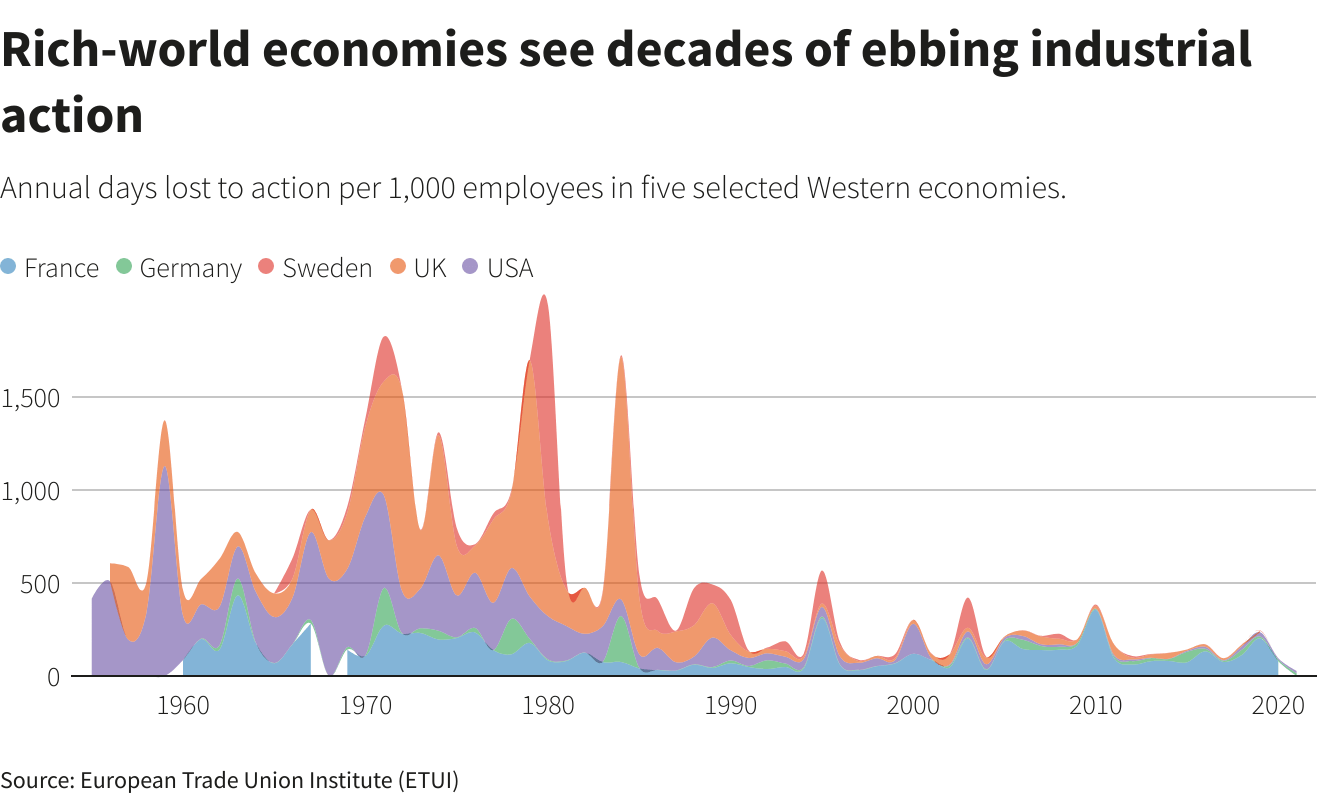 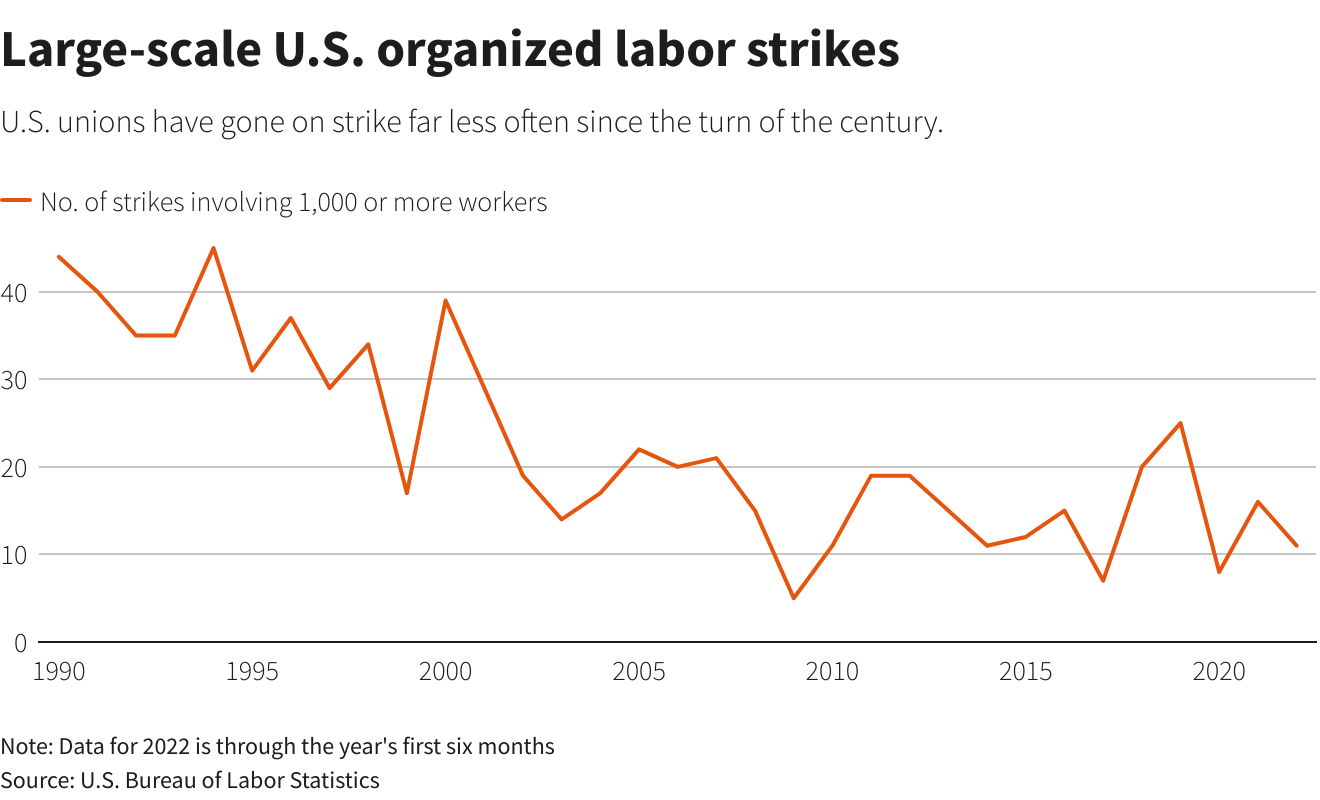 Since its 1990s "lost decade", Japan has rarely seen industrial strife as union leaders prioritise job security above wage hikes. Other Western economies such as Australia have passed laws to make strikes harder.

In Europe, unions can still wield power despite falling membership. But data compiled by the European Trade Union Institute (ETUI) show a similar dip in labour-related disruption as trends from outsourcing to the gig economy emerged.

"There might be grievances in society and on the work floor but this social injustice needs to be organised and channelled," said Kurt Vandaele, senior ETUI researcher.

"Fissured workplaces might make it harder to set up industrial action because in the same place you have different categories of workers, different companies. This is increasing the coordination costs for unions."

A 2021 report by the International Labour Organisation warned trade unions they risked being marginalised unless they served those in precarious or informal employment - notably young workers, for whom secure contracts are rare.

There is some evidence that unions are taking that on board.

Some labour leaders, such as Christian Smalls, whose activism led in March to Amazon's first labour-organised warehouse at Staten Island, or UK transport union boss Mick Lynch, have even emerged as social media stars.

Encouraged by the union-friendly Biden administration, U.S. petitions for a vote to see whether employees want to unionise rose 58% from a year earlier to 1,892 in the nine months to June 30, the National Labor Relations Board said this month.

Among them are workers at Starbucks and Chipotle, while tech employees are becoming more vocal about pay and conditions. Yet current U.S. law still gives employers scope to avoid offering contracts with legally binding terms, labour experts say.

"In this country, to get from not having a union all the way to having a union contract is an incredibly difficult journey," said Lane Windham, associate director of Georgetown University's labor center.

Germany's biggest union IG Metall is pushing this year for an 8% pay rise, a marked shift from its recent focus on job security. In Britain, where airport staff, lawyers, teachers, medics, postal, telecom and rail workers are eyeing action, the Trades Union Congress cites a surge in traffic to its "find a union" web page.

What such trends amount to remains to be seen. But governments are taking notice.

South Korea this month condemned as "illegal" a strike at Daewoo Shipbuilding & Marine Engineering 042660.KS (DSME) and warned of intervention to break the bid by some 100 subcontractors to secure a 30% pay rise.

In contrast, Germany's centre-left coalition, fearing a looming energy crisis will trigger social unrest, has opened consultations with employers and trade unions over ways to shield households from rising inflation.

"The goal is to pull in as many stakeholders as possible so they can tell people they are doing all they can," political analyst Gero Neugebauer said.

But with wage gains lagging headline inflation rate driven by food and energy prices, that argument has little traction with labour leaders.

"The risk is not inflationary wage pressures," said the ITUC's Burrow. "The fact that working people cannot participate in the economy to extent they want, even for basics like energy and food in some cases, is fuelling a slump in the economy."