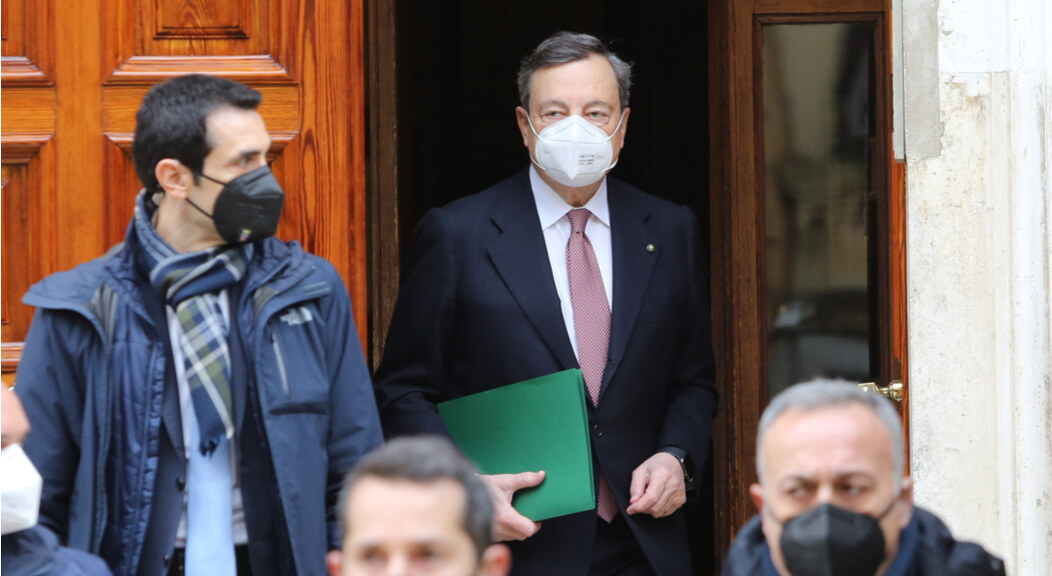 With the former head of the ECB now officially sworn in, Rome is home to a technocratic government for the second time since 2000, just under a decade after Mario Monti was tasked with pulling Italy back from the fiscal brink after the 2008 economic crisis.

While Monti’s tenure was synonymous with a painful austerity programme he himself criticized, Italy’s new prime minister is tasked instead with shepherding Italy’s plans for its share of the €750 billion European recovery fund.

Draghi has called the €209 billion Rome is set to receive from Brussels “a unique opportunity to invest in many high-value projects,” while European Commission president Ursula von der Leyen calls for these funds to drive twin “green and digital” transitions.

That framework should suit Italy’s new leader well, given how much of his country’s economic future depends on his government’s ability to put Italians – inventors of the telephone, the battery, and the MP3 - back on the digital map.

Given these high stakes, former PM Conte’s draft recovery plans were criticised for a lack of focus on necessary reforms, a key condition attached to the Next Generation EU recovery package.

It didn’t help that the previous government paid limited attention to a detailed proposal for digital investment it had itself commissioned. That proposal was drawn up over six months last year by a panel of economic experts led by Vittorio Colao, who Draghi has now chosen to serve as Italy’s minister for digital transition.

The strategy proposed to Conte laid out an approach to ‘relaunch’ Italy by way of innovation, underscoring the need for recovery funds to be directed towards investment in digital technologies.

No area demonstrates Italy’s digital investment needs as well as the country’s broadband and 5G rollouts, which are stalling for want of public support to bolster the investment already being undertaken by telecoms firms.

As Covid-19 accelerates the digitalisation of social, economic, and institutional life across Europe, Italy’s widening connectivity gap has been thrown into sharp relief.

Addressing that gap will require concerted leadership from Italy’s political institutions. In the words of Andrea Lisi, head of the Italian national association of digital content operators, Draghi needs to double up as both PM and “Chief Digital Officer".

Branching out broadband and 5G connectivity

The EU’s 2020 Digital Economy and Society Index (DESI) highlights how Italy is lagging behind many of its European counterparts, only just keeping pace with the bloc’s average connectivity score with a rank of 17th out of 28 countries.

Some 30% of Italian households are covered by very high-capacity networks (VHCN), and 13% of households have broadband connections with speeds above 100 Mbps; in top-ranked Denmark, those percentages stand at 93% and 34%, respectively.

While the country came into 2020 outstripping much of the rest of Europe in terms of its “readiness for 5G,” with the successful auctioning off of 5G spectrum over two years ago marking an auspicious start, Italy’s slow-moving bureaucracy and high costs are now jointly blamed for a lagging rollout.

Part of the problem is that the Italian telecoms market is characterised by low end-user prices compared to other EU countries. While these low rates are good for individual consumers in the short term, they also mean spending on digital infrastructure in less populated areas doesn’t always offer returns attractive enough to justify private investment.

Spending on infrastructure is further impeded by the high costs and substantial red tape associated with 5G rollouts on the peninsula, with long waiting times and requirements for permits that vary between different regions and municipalities.

Overcoming these obstacles will require spending money, but also political capital, to lower the costs of investment and eliminate bureaucratic hurdles, both in order to speedily roll out fibre-to-the-home (FTTH) networks in so-called ‘white’ and ‘grey’ areas and to get Italy up to speed with its deployment of 5G. Fortunately, Draghi comes into office poised to do both.

Ensuring all Italians can connect to the Internet is indispensable for future-proofing the country, as the EU moves into what Ursula von der Leyen calls Europe’s “digital decade”.

5G and ultra-fast broadband networks, which enable high speeds and ensure low latencies, will help businesses integrate new technologies and families take full advantage of the Internet of Things. In macroeconomic terms, expanded connectivity is vital to reviving growth in an economy now smaller (in real terms) than it was ten years ago.

Now-PM Draghi’s comments about the need for astute use of EU recovery funds to stimulate the economy and drive growth suggest overdue change might be just around the corner. Draghi insists Italy’s government debt levels will only be sustainable if “good debt” is “used for productive purposes”.

When he still led the ECB, Draghi stressed that "a lack of dissemination of innovation is largely contributing to the slowdown in aggregate productivity… it is important for the Eurozone to facilitate and encourage the spread of new technologies from the leading firms to the most sluggish ones".

The seasoned economist will now be asked to use a large tranche of Italy’s EU recovery funds to precisely those ends, ensuring the country stabilises but also that it grows out of its worst health and economic crisis since World War II.

Draghi’s track record in Italy and at the ECB shows him to be an astute listener and a bold policymaker. His countrymen are now relying on him to do “whatever it takes” to lay the foundations for a robust digital economy.

Draghi himself once wrote that “if one opts for a short-term course of stabilization, the long term optimum will never be achieved.” Given the amount of ground Italy has to make up in order to meet the challenges of the digital decades to come, Rome’s new leadership needs to embrace long-term thinking now more than ever.