A significant proportion of employers have revealed an increase in their gender pay gap as the deadline for reporting the information ended, it has been suggested.

Most of an expected 10,000 organisations published their gender pay comparison by midnight on Thursday.

An analysis of the figures will be made on Friday, as well as details of those firms who missed the deadline.

Companies employing more than 250 workers who did not provide information on any pay difference between men and women face a fine.

A handful of councils, NHS trusts and universities have already missed the March 30 deadline for public sector organisations.

Peter Cheese, chief executive of the Chartered Institute of Personnel and Development, said: “It’s disappointing that many employers are still not providing a narrative or action plan.

“Organisations that simply provide their numbers are failing to meet the increasing appetite and expectation for transparency amongst all stakeholders, including employees, investors, and regulators.

“Financial figures would never be given without any explanation for them, and gender pay gap reporting should be no different.”

He added that submissions had suggested that a “significant proportion” of companies have reported an increase to their gender pay gap.

“Some of this may be from businesses initially focused on bringing more women into entry-levels roles in order to build a pipeline of female talent.

“This is a genuine commitment to lasting change and we must welcome these efforts even if it does mean the numbers do initially go up instead of down.”

“Government needs to crank up the pressure.

“Companies shouldn’t just be made to publish their gender pay gaps, they should be legally required to explain how they’ll close them, and bosses who flout the law should be fined.

“We can’t allow another generation of women to spend their whole working lives waiting to be paid the same as men.”

Jenny Gilruth, an SNP MSP in the Scottish Parliament, said: “The gender pay gap is smaller in Scotland than it is in the UK, but our economy could benefit by a further £15 billion if we had the powers to fully eradicate that gap between male and female workers.

“The evidence is clear: better opportunities for women to participate fully in our economy means improved performance overall.

“We have the opportunity to achieve more in Scotland when it comes to equality than the painfully slow progress Westminster has delivered.”

Carolyn Fairbairn, director general of the CBI, said businesses cannot close the gap by themselves, adding: “Many of the causes lie outside the workplace including a lack of affordable, high-quality childcare and better careers advice.

Minister for Women Victoria Atkins said: “Whilst the latest figures show that the national gender pay gap is at a record low, there is still much work to be done to achieve real gender equality in the workplace. We want businesses to take responsibility for tackling their pay gaps effectively.

“Diversity makes good business sense. Businesses should use the data to understand the causes of their pay gap and then commit to tackling it for good.” 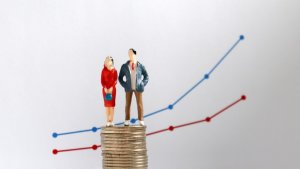 Gender Parity Is Good For All Of Us